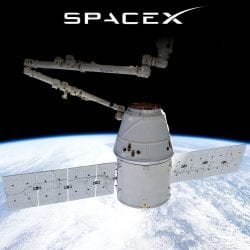 Dragon arrived at the International Space Station on March 9, 2020 and was captured at 3:25 a.m. PDT while flying over 262 statute miles over the Pacific Northwest. The spacecraft was then installed on the Harmony module for the duration of its four-week stay at the orbiting laboratory.

Filled with approximately 4,500 pounds of supplies and payloads, Dragon launched aboard a Falcon 9 rocket on March 6, 2020 from Cape Canaveral Air Force Station in Florida. The Dragon spacecraft that supported the CRS-20 mission previously supported the CRS-10 mission in February 2017 and the CRS-16 mission in December 2018. Dragon is the only spacecraft currently flying that’s capable of returning significant amounts of cargo to Earth.

Content created by Conservative Daily News is available for re-publication without charge under the Creative Commons license. Visit our syndication page for details.